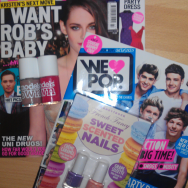 I learned from Swishie Nails’s blog post today that More magazine was giving away two Model’s Own nail polishes. These usually cost £5 each, but as the mag is only £1.50, that’s a bit of a bargain.

I didn’t want to miss out, and my lovely husband offered to go and buy the magazine for me!

It probably cost him more than £10 in petrol though because he went to 11 different shops in 6 different towns. Reckon he loves me, eh?!

He got both colours though. One is Nude Beige and the other is Raspberry Crush.

He also came back with We ♥ Pop magazine, which is some sort of teen pop mag, full of popstar photos and One Direction gossip! (I’m sure it’s no worse than Smash Hits was in the ’80s). But, it had two free nail polishes, which is why he bought it. Unfortunately, they’re aimed at the teen market, so they are rather cutesy colours and … not sure about this bit … they are scented! One is Grape Suzette and the other is Creme Caramel. I’m not sure they’re aimed at 45 year olds but I will give them a try. You never know how they might turn out.

You know you love a bit of one direction really 😉