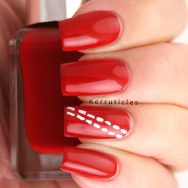 The Twinsie Tuesday prompt today is to create nails inspired by our child. My 11-year old son is mad about cricket. He’s been playing since he was about five, and plays or trains several times a week, even through the winter. He’s just been accepted into the Surrey District squad too, so I’m very proud of him. In honour of that and inspired by his great passion, I have created some cricket ball nails.

Let me say right now, upfront, I don’t like these nails at all and I’m not proud of them. They were a desperate solution to a difficult prompt. My son likes lots of things that I could be inspired by … Harry Potter, Minecraft, Surrey County Cricket Club, Chelsea Football Club, NFL/New York Giants, and more. But they would all have needed some form of intricate freehand. And I’m no good at freehand, so prompts like this are hard for me. Hence why I’ve taken the easiest option I could think of.

The lines represent the stitching on a cricket ball. Even then, they’re not very accurate. There should be two further sets of diagonal double lines, one set each side of this. But when I first did them they just took up the entire nail and looked ridiculous. So I’ve stuck to a double dashed line, which will have to do. I drew them on with a white Barry M Nail Art Pen.

It’s not even as if the lines are any good, either. The pen didn’t want to sit nicely on the top coat, and the colour kept shrinking and withdrawing into itself. However much I left it to dry then went over it again, it still hasn’t left nice, even lines.

Can you tell I’m not happy today? I hate it when I think I haven’t done as good a job as I could. What a misery guts I am!

To cheer me up – and to help out those of my international readers where cricket isn’t played in their country – here’s a short guide to cricket … There are two sides. One is out in the field and one is in. Each player in the side that’s in goes out, and when he’s out he comes in. Then the next player goes in until he’s out. When they are all out, the side that’s out comes in and the side that’s been in goes out and tries to get those coming in, out. Sometimes you get players still in and not out. When a player goes out to go in, the players who are out try to get him out, and when he is out he goes in and the next player in goes out and goes in. When both sides have been in and all the players are out, and both sides have been out twice after all the players have been in, including those who are not out, that is the end of the game. (Adapted from the television comedy, Mind Your Language).

Confused? Then add to that the fact that cricket is the only game you can play for FIVE days that still sometimes ends in a draw! (I do love it though).

Please take a look at all the other child-inspired manicures from the Twinsies this week:

You do crack me up. “Misery guts?” 🙂 I wish SO much I lived over there. I might even make an attempt if my ‘merica accent wasn’t so abysmally bland. I hear you real English speakers aren’t that fond of us fake English speakers, and even less so when we come without one of our regional dialects (twangs, drawls, clipped, etc.)? Anyway, moving on to silver linings for your mani:

Your nails are looking lovely!

That’s a very pretty shade of red on you!

And I very much enjoyed your adapted explanation of cricket. I actually tried to follow it for a while, envisioning it in my head, but then I gave up and just enjoyed the rhythm of the words. It was fun you included that…thank you. 🙂

Thank you for saying lots of lovely things and cheering me up. (I still hate the nails though. I’m going to post something nice in a bit, which will mean I don’t have to look at these nails on the front page any more!)

Ugh…I’m another perfectionist and it bothers me I forgot to put a comma after “head!”

Awww, you’re the sweetest! 😉 That actually does make me feel better.

That red is gorgeous! That’s awesome to hear your son made it in the Surrey District squad for cricket too.

As someone who knows little to none about cricket, I think this looks great!

I’ll never understand cricket, but I love that red! My eldest son is 11 too 🙂 Well done to your boy!

I love the red base!

I know absolutely nothing about cricket (before this post), so for all I know that is a spot-on interpretation of a cricket ball. 🙂

I think these look great! It’s a simple but striking design!

I’m really bad at freehand too! I have no idea what I’m going to do for the upcoming favourite food prompt… I do like the way this mani came out though! 🙂