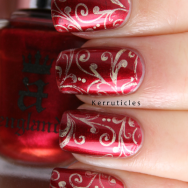 I wasn’t sure what to do with today’s prompt in the Crumpet’s Nail Tarts 33 Day Challenge.

For me, “Indian” is more about the sub-continent of India than Native American Indians because I’ve travelled in India a couple of times. So I did at least get that far, but then I got a bit stuck.

At first I thought about emulating some mehndi (henna) tattoo designs, but eventually I settled on recreating a sari design. I saw a beautiful red sari, with gold embellishment, and decided that was what I was going to do. I painted a base coat of the fabulous A England Perceval, then came to a halt. There was no way I could recreate the design – my freehand skills are too poor.

In the end, I compromised and stamped a design in gold over Perceval. It’s not quite the sari design I saw. Ironically it’s more like a henna design, so I’m not sure how Indian these nails look after all. But I like them!

This is the first stamping I’ve done with my new squishy stamper. I had to prep it a bit to get it to stamp. I filed it a little and then swiped it quickly with acetone, but it still missed a few bits. The gaps can’t be seen when I hold my hand at arm’s length, but they’re very visible in this photo. Never mind, it’ll take a bit of getting used to I think, but it’s far better than my usual stamper.

I love the squishy stamper, mine arrived on Tuesday and I’ve stamped every day since! I think the nails you’ve done do have a sari look about them more so than a henna design, the only addition I’d have been tempted to make would be glequins for some extra sparkle!

Did you have to prep your squishy stamper at all? Mine doesn’t seem to be picking up all the image still.

Just thought… If I’d still been participating I could’ve posted my unpolished and stained nails, saying they look like they have been henna’d!