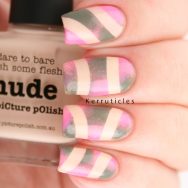 After several months of secrecy, I can now reveal that I was lucky enough to be selected to take part in Picture Polish FEST 2015.

In case you’re not aware of it, each year since 2011 Picture Polish has created a bit of a blog fest, with bloggers creating nail art or doing swatches with three Picture Polish shades that they are sent.

I have watched the annual Fest with interest over the past few years, and have seen some awesome bloggers create some fantastic nail art. I didn’t ever expect to be selected, so I am extremely delighted and very honoured that I have been.

I received three polishes from Picture Polish: Nude, Camo and Candy. The brief was to create a nail art masterpiece with them. With such a big ask ( … masterpiece? … goodness!  … little old me? … a masterpiece?), I thought long and hard about what to do.

I initially wanted to watermarble with them, but the pink wouldn’t play nicely. It dissolved into the nude. I tried a dry marble instead, and thought it would work well as the polishes are nice and fluid. But they seemed to dry too quickly on the nail and wouldn’t dry marble well.

So ultimately, I chose a design using some nail vinyls. In this case, they are French tip guides. I painted a base of Nude, and then sponged on the other two colours.

All the shades I received are very aptly named. You could guess what colour they are just from the names. Nude is a soft beige colour. It took three coats to be opaque and to get an even finish. Candy is a sugary sweet pink. I have only swatched it on a wheel, and it took two coats to look nice and even. Finally, Camo is a khaki green; the perfect camouflage green. It had great coverage and density and was almost almost a one-coater.

I don’t think I’ve managed to create a masterpiece, but I did my best.

I’m so excited to see who else is participating and what they have each created. All the manicures will be posted on the Picture Polish Instagram account (although the guys are probably fast asleep at the moment, seeing as they are in Australia, so you might have to wait until tomorrow to check them all out).


All manicure images are copyright to Kerruticles unless otherwise mentioned.
Picture Polish Nude, Candy and Camo were sent to me for review. All views expressed in this post are my own, honest and unbiased opinions.
China Glaze Ugly Sweater Party…China Glaze Ug…Winter Trees | 40 Great Nail A…Winter Trees |…

I think these nails represents you very well.
They are like a clash between tomboy and Princess.
Perfect

This is nice! I like the sponging with the colors and the design a lot.

You sponged over the vinyls and peeled them off? I love what you did with these three impossible shades. You created a Piece of Master!

Thank you. Yes, exactly right. I painted the base and left it to dry, then added the vinyl, sponged over them and peeled the vinyls off.