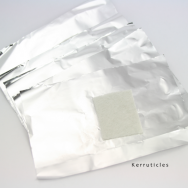 At one of the stands at the Professional Beauty Show at ExCeL back in February (can’t remember which stand)  I saw some foil nail remover wraps. They were for removing gel nails, but for those of us who don’t use gel polish, I thought they might be good for removing glitter nail polish.

When I first started painting my nails regularly, I loved wearing glitter, but it was such a bore taking it off, scrubbing at it for upwards of half an hour. I read about – and tried – PVA glue as a base coat. But I found a nail or two would unexpectedly spring off on day two, so I now only use it when I wear glitter very short term, like for a party or something.

So typically I use the foil removal method, and it works well. But I’m a lazy so and so, and I can’t be bothered cutting up foil and cotton balls. And more to the point, I’m fed up with being told off by my husband for having used all the tin foil just when he wants to cook one of his fancy, cheffy meals that requires it.

So I thought the foil remover wraps I’d seen at the show might be a good option. After a bit of an online search, I found OPI ones, but they were really expensive – around £4-5 for 20 wraps. Then I came across Magis Foil Nail Wraps, a UK company that makes and sells them at a far more affordable price! I contacted them to see if they would provide a sample so I could try them out. I’m pleased to say they were extremely kind and sent me both some gel remover wraps and some more heavy duty remover wraps for acrylic nails, plus some acetone.

I tried the gel ones on one hand of nails. I wanted to really put them to the test, so on top of a manicure I was already wearing, I added three coats of glitter polish:

After leaving it to dry for a couple of hours, I used the remover wraps to take it off. I added some drops of acetone to the cotton pad, just enough so that it was soaked, then placed my nail onto the pad and wrapped the foil wrap around it, finishing by wrapping the top over the back of my finger . I used acetone rather than normal nail polish remover, as it’s quicker and more effective. The foil of the wraps is much sturdier than household tin foil, and there’s a folded edge which nicely stopped the acetone from leaking down my fingers, which is what usually happens for me.

I left the wraps on for five minutes, then removed them by pressing down on the nail and rubbing side to side as I simultaneously pulled the wrap off the finger. They worked brilliantly and the glitter and polish slid off the nail very easily. They’re certainly better than my home made versions and got almost all of the glitter off straight away. Only a few tiny patches where glitter was along the sides of my nails needed a bit of a swipe with either the same pad of the remover wrap, or with some clean, acetone-soaked cotton wool.

I love that these are pre-cut and prepared; they are so convenient. When I make my own, it’s not only a faff to prepare them, but the cotton pads also slide around while I’m wrapping the foil around them. I also get acetone seeping out of the bottom edge and down my hands. But with the more sturdy foil of these wraps, everything feels very secure, and I’m sure that’s why they work better than my own ones.

It’s also worth mentioning that the manicure over which I added my three coats of glitter already consisted of 7 coats of polish – a base coat, three polish coats, a top coat, an additional colour coat (it was a “cling film” manicure) and a final top coat. So these wraps easily took off ten coats of polish in five minutes.

If you don’t have acetone, Magis also sell a home soak off kit that comes with 50 wraps, a wooden manicure stick and a 50ml bottle of acetone. The small bottle of acetone would be great for when travelling or for popping in your handbag.

Magis also sent me some of the more sturdy wraps – meant for acrylic nails. The foil is the same, but they have a foam pad, which is more thickly cushioned than the cotton pad of the gel remover wraps. I didn’t try these out though, because the ones for gel nails – which are cheaper – were absolutely fine. They also do smaller wraps for toes – although I don’t tend to wear glitter on my toes.

I’m so pleased to have discovered these, and they’re a great new addition to my nails staples.

Everything you wrote sounds so familiar! I only use glue for very short wear as I don’t trust it not to peel off the next day, getting told off by the hubby when he goes for the tin foil, the remover dripping down the fingers… I should try these, but I’m too tight to pay that for 100 when I can buy cotton wool and tin foil for much less!

I take your point. But I’m just lazy and I think investing £26ish a year to remove 50 glitter manicures is well worth it! Compared with how much I spend on nail polish, it’s next to nothing!

Would you believe I left that comment earlier then spent a good 20 mins scrubbing glitter off my nails (it’s still on my skin in places, grrrr) with the last of my acetone (how I run out I’ll never know) and we had no tin foil in the house either, so scrubbing was the only option. I think you may be right that £26 for fifty glitter removals seems ideal (especially right now!)

But I use a set of rubber finger ‘cots’ (as used in offices for turning paper) over my remover-soaked cotton pads to hold them in place. I got them from amazon for a couple of pounds and I’ve been using them for about a year now. Cheap and effective, and I never have to worry about running out of foil!

Do you use acetone with the rubber finger thingies? Or would it dissolve it?

I’ve tried those bizzare finger soakers – pink and clear plastic – but they leaked like crazy.

I use Elegant Touch Super Strength (for glitter) remover and that’s never failed to get rid of any of my glitterbombs. I don’t like using acetone over my whole nails, I just keep it for clean-ups.

I get the Elegant Touch remover from Tesco, btw.

i have a peel off base coat, but the polish doesn’t last more than a day with the peel off base. this seems to be good. hmm…i’ll keep an eye out for these pre-cut wraps in singapore….