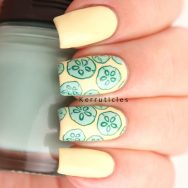 The Twinsie Tuesday prompt today is inspired by your favourite food. And with that, I have some cucumber nails! Yes, I know it’s strange, but I shall explain.

I had wanted to do some chillies on my nails to represent the spicy food like Thai curry that I love. But the chilli on my stamping plate looked too large.

So then I was going to stamp some sweets (candies to those of you in the US). However, as I was going through my stamping plates looking for suitable images, I was very taken by an image on Bundle Monster BM-505. I wasn’t sure what it was supposed to be, but it looked like cucumber to me. This plate is from the Sun Kissed collection, which has beach and sea-themed images. So it’s patently *not* an image of cucumbers. But it looks like it. I don’t particularly love cucumber, but I suddenly really wanted to put cucumbers on my nails!

The base is Revlon Buttercup, which is a lovely pale yellow.

I stamped the image using Mundo de Uñas High Green (37) and then filled it in while it was still on the stamper. I used the palest green I could find, SpaRitual Delight. It’s not quite right for the centre part of a cucumber. But hey ho … artistic license and all that!

My husband says they don’t look like cucumbers. But my son – who happens to eat cucumber practically every single day – declared straight away that they were indeed cucumber nails! (Gotta love your only son for nail praise like that!)

It was then that I had a complete catastrophe. I had slaved over these nails for ages last night, but I needed to take them off as I had a meeting to go to today. So I whipped out the acetone and was half way through removing them when I suddenly realised that I hadn’t photographed them. It was late and I needed to paint something plain for today, and anyway I had already removed half of the manicure, so I had no choice but to completely remove them.

It was a huge facepalm moment. I was gutted, but I repainted them this evening when I got home from my meeting.

[EDIT – I had a bit of a Google and it appears this image is of sand dollars – never heard of them, but they are apparently flat sea urchins. Who knew?]


All manicure images are copyright to Kerruticles unless otherwise mentioned.
SpaRitual Delight was sent to me for review. All views expressed in this post are my own, honest and unbiased opinions.
Matte Red Nails | Nella Milano…Matte Red Nail…Turquoise Comic Style Nails |…Turquoise Comi…

Cute cucumber nails! Its so refreshing to see 🙂

Funniest nail art journey you took there! Looks cute though!!

Wasn’t it! All very melodramatic!

Well, why wouldn’t you have cucumber nails – at the end of November?!

I Thought you freehanded this! So original, I love it!

I really like the way this came out! I don’t think I’ve ever seen anyone else do cucumber nails before! 🙂 buttercup is the perfect base color. I guess in the proper colours the stamping image would look like sand dollars but that definitely wouldn’t have been my first guess if I just saw the plate haha

Nobody’s done cucumber nails before, because why on earth would they?!! Ha ha! Still, at least it’s innovative 🙂